“Australia is the only country in the world where KTM does not win every rally raid style event we enter. The GHR Hondas are the only bikes in the world to give us any competition"
- Quote from KTM (Europe) Factory Team Manager, Safari 2004.

See what a couple of our customers have thought of our XR650R Mods on their bikes HERE & HERE.

I still get calls about Honda XR650R's. Thought I'd put all the details down before dementia hits and I can't remember a damn thing. I was working for Ballards/XR's Only when the 650 came out.

The XR650R was the bike Honda used to replace the legendary XR600R. We started hearing about it in '94. The XR600 was almost unchanged since 1986 and we kept getting whispers of Johhny Campbell and Scott Summers testing the new bike.
There was so much hype about how good the XR650R was going to be that when we received one of the 5 pre-production bikes in January 2000 we all stood around and wondered what on earth Honda was thinking! It looked really heavy. Geoff Ballard rode it at an ADB test and dismissed it as a pig. We had been racing WR400's and XR250's so the 650 was a bit of a shock! Part of my employment agreement was I got a bike every year. GB gave me the 650 as he didn't want to ride or race it.

Slowly over a few weeks I pulled off all road gear, put some normal gearing on it, grafted on a reverse cone FMF Megaphone pipe from an XR600, did some suspension work and went for another ride. Big surprise. It was fast! Pip from Honda gave me a few tips and GB asked for a ride on it when we were out practicing one day. He liked it.

Since then we've raced the 650 in Thumper Nats, Geoff Ballard won the over 35’s title on it in 2000 and 2001. I built the engines for the official Honda Safari effort from 2001 to 2005 (Staintune Honda GHR Safari Team) and grown to love the bike. It’s now ended it’s production run quite a while ago, but will be a very good desert / long distance / supermotard / trail bike for many years.

The forks are very undersprung (0.44kg/mm) for most applications, feeling both harsh and wallowy at the same time. They use HiCalibre 19-140 Series Fork Springs. The front also sits quite high, so try sliding the forks up in the clamps about 20mm.

We still use the settings Michael Byrne used to win the Thumper Nats and Jamie Cunningham used to win the Safari. All our trail riding settings are spin offs from the race settings. We dyno test before, strip the forks, revalve and service, then dyno test again to make sure we are on the money.

Jamie Cunningham in action in 2003. Thanks for Glenn Batho for the link. We still extend the rear shock 6mm for tall riders, as it really helps the turning.

We have built a bunch of CR500/XR shocks, and we still have the settings. The shock gets a full rebuild, we keep the 44mm piston ring that you have to buy direct from KYB, we check every part for wear and replace as required. We have refined our settings over the years to use better settings than ever with the aid of dyno development.

We're happy to sell you an aftermarket shock if you want one, and they do have some tricky shiny bits, but our stock KYB shock mods are world champion quality, and cheaper. It runs a 20-080 Series Shock Spring. 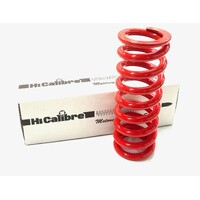